Mom used to tell us that as kids, she and her brothers and sisters (all seven of them!) ate fresh bread every day. Not because they were fancy, but decidedly the opposite–they were too poor to buy supermarket bread.

How did they do this? Every night, they would make “bucket bread,” meaning that they put the flour, yeast and other breadly whatnot into a bucket, letting it rise overnight. When it had risen to reach the top of the bucket, it was ready to bake. Mom and her sisters would pull off and flatten little balls of dough, bake for 15 minutes and just like that, you have khubz arabi.

Now what grandma called “bucket bread,” the more hipsterish among us would call autolysing – referring to the long period of letting the dough sit, in order to work the gluten. And yes, when it comes out, there is no kneading required, just pop it out and bake.

I will mix up a batch of dough every so often, and just keep a big bucket of it around to make flatbreads and pizzas. This morning I baked the remnants of one batch into incredibly tasty cinnamon rolls. Making the rolls is exactly the same technique as the onion pancakes 葱油饼 they make in China: roll the dough out long and flat (9×18 inches or so), paint one side with butter, sugar, cinnamon and walnuts (and a little salt, if the butter doesn’t have any), roll lengthwise into a long cylinder and cut into rounds. Arrange these in a baking dish and let them rise to about twice their size, then pop in the oven at 325F/160C for about 45 minutes – until they have browned on top and sound hollow when you tap them. 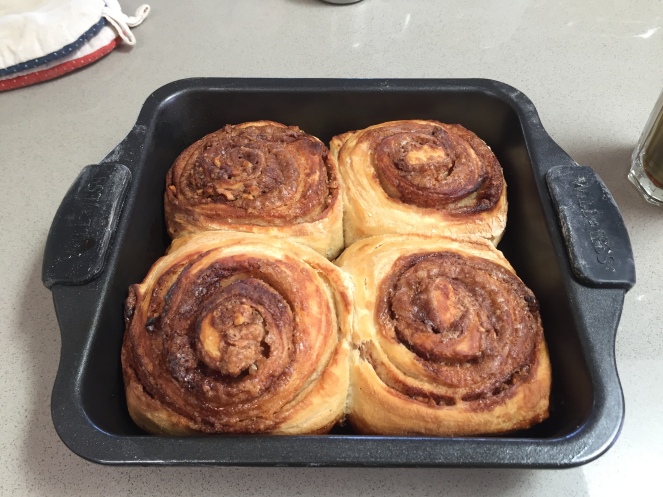 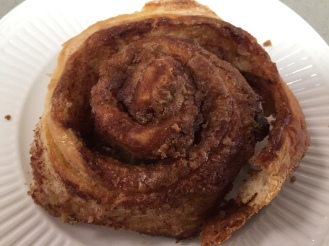 Seriously – this was about 20 minutes of actual work, but the result was incredibly good (and photogenic!). The best part was the bread itself, light but also moist and chewy. The secret is the easiest part–letting the dough rise overnight (or in this case, two nights, cos I made too much), and for that I thank grandma and her bucket bread.